In our family, we like to talk, debate, and argue like two hungry lions at a “who wants the first rip at the antelope” party. Everyone has an opinion about every damn thing around here, so it was really no surprise that I got such an earful when I asked my children (ages 18, 20, 21) what they thought of women having plastic surgery on their vaginas.

The first thing they ALL said was, “What’s the problem? If someone wants to do something to make themselves feel or look better, then why shouldn’t they?” Not one of them hesitated, which makes me wonder, am I getting old and are my opinions old-fashioned? Or are my children just totally caught up in appearances like everybody else on this planet? As if turns out, it’s a little bit of both. 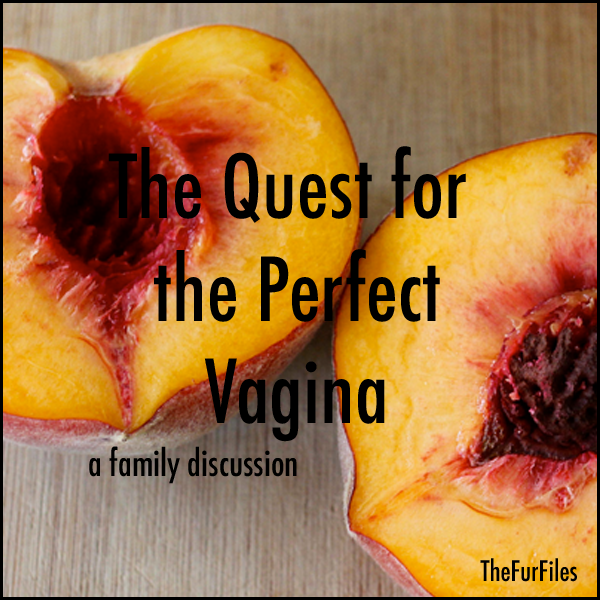 “Don’t you think that having surgery on your vagina might be going a bit too far?” I asked. Honestly, I just can’t wrap my head around this one. I understand that people are doing it, and I’ll even concede that in some cases it might be warranted, but for the vast majority, I’ll bet it’s not. I think the same way about breast implants. I’m not a big fan of those either. “You know that I think natural is better,” I said to the kids.

“You’d better watch it, Mom,” snorted my oldest son. He is like the “ethics” king in our house, the doer of good deeds, the watcher-outer for anyone with false intentions. “You do lots of things to yourself that aren’t exactly ‘natural’. You get your hair done. You shave your legs. You put cream on your face to keep your skin clear. You even had braces as a kid. So how can you say that doing one thing is OK and another is not? If you think people should be natural, then you should be completely – and I mean COMPLETELY – natural yourself, otherwise you’re a hypocrite.”

Now, my son is smart – which is good – but sometimes I just want to punch him, metaphorically speaking of course. “So are you saying that it’s all or nothing? Are you saying that just because I use pimple cream (still), and just because I had a monoblock dental bracket when I was nine so that my front tooth didn’t stick straight out, I can’t have an opinion about women altering their vaginas. Some things carry more risk. I think that’s my main concern. A person could die from having surgery.”

“Risk doesn’t always compute when you are not happy about something. And taking that risk is up to the individual to decide.” He’s right. People will do whatever it takes if they feel like they aren’t living up to society’s standards.

“You can’t control what other people do,” my daughter chimed in. I sort of had the feeling that she was talking about herself here since she has a tendency to be a bit of a rebel, but at least she was participating in the conversation. That doesn’t happen very often.

“I’m not trying to control anyone,” I said. “I just think it’s a sad state of affairs that some women feel the need to cut their vaginas, or their breasts, or whatever, in an attempt to be ‘normal’ or ‘attractive’. Most people don’t even know what ‘normal’ is. And what the media tells us is ‘attractive’ is pretty much unattainable.”

And this is about where the conversation went from semi-rational to a slightly psychotic.

“I just feel like nobody can tell anybody else what is excessive. If that were the case, people might say you work out too much. They might say that by overdoing it, you are putting yourself at risk for injury. What about that, huh? Also, if you are talking about excess, what about our house, or the cars we drive, or all the televisions we own? Personally, I don’t think you or I or any of us in this family can talk about excess, which is why I say if someone wants to change the way their vagina looks, then they should. You’d have to live in a grass hut and wear the same thing every single day and never do anything to yourself ever in order for to make judgement, because right now, you are being that hypocrite I was talking about.” Whoa. Shots fired.

“I see your point, but that doesn’t mean I have to agree that having plastic surgery on your vagina is a good idea. I just want women (and men) to feel good about themselves.”

And then someone – possibly my younger son – made the comment that if your vagina looks like a wizard’s sleeve, then surgery is definitely warranted.

And then someone else – possibly me – told that person that he was being an ass.

And then my husband got involved, and voices got louder and louder.

In the end, no one got whipped with a iPod cord, thank God. As my oldest son flew out the door on his way to band practice, he said, “I’m just saying Mom, if you want to change the world, you have to set a good example yourself.”

“Thanks, son. I’ll try,” I answered. I love being lectured by a twenty-one-year-old. At least I know, I’ve raised him right – I think.

Quiz: Do You Have A Healthy Body Image

Enough: Breaking Free From A World Of Excess