When I was younger – BEFORE children – I was different. As you might expect, physically I was different, like my belly was relatively smooth and stretch-mark free, like I didn’t have so many grey hairs, like my vagina hadn’t been assaulted by a doctor’s arm and three bowling ball-sized creatures that had passed through it.

Emotionally, I was different as well, like I didn’t worry so much about every single, itty-bitty, teeny-weeny thing.

And I bring this up now because my girlfriend wants me to go with her so the two of us can get our motorcycle license together. I’m not sure. Honestly, I feel like it would be taking a risk that I’m not ready for. My children still need me – a lot. And I know, I could walk out the door and get hit by a bus tomorrow [knock on wood], but still, motorcycles make me nervous. Not that I don’t think I’d look good on one. I would – in my leathers, and my sexy boots, because I WOULD have sexy boots. Not sure how the helmet would affect my hair though.

OK, so I was never a huge thrill seeker, but I was also never such a super cautious “I hide in the closet for most of the day” loser either. When the kids came along however, I turned into a worrywart in every sense of the word.

I worry about the most ridiculous things.

I hear a noise, and I immediately think, “OMG, a meteor is about to strike the house.” It could happen. #Chelyabinsk 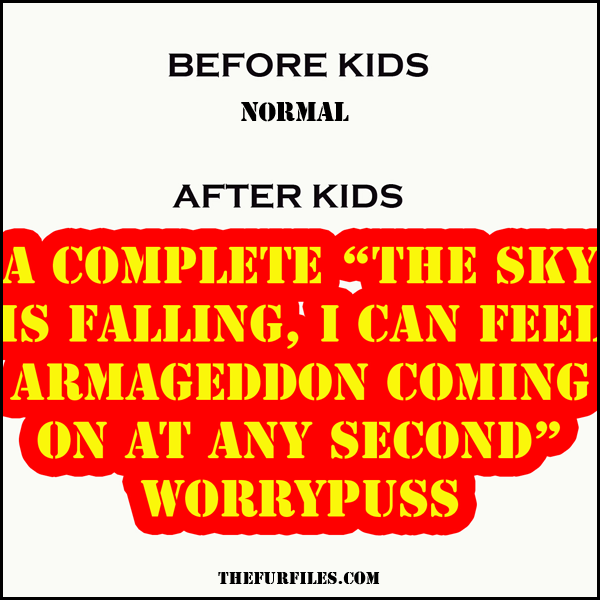 I worry that I haven’t turned the stove off. I think we all do that, but do we all go back into the kitchen and stare at the knobs for a good 30 seconds or so, touching and retouching them just to make sure? My husband says, “Crrrrazy.”

I worry that I’ll get attacked by a dog when I go out for a run. I saw a girl the other day – and she WAS a girl, not more than sixteen – walking these two HUGE German Shepherds. I thought, “What is she gonna do if they decide they want to rip my leg off?” That’s right, not a damn thing, and then I’d be left maimed and/or legless for the rest of my life. And I work so hard to keep my legs strong. What a shame it would be. Sadly, I’m no match for a canine that’s gone berserk.

I worry that my daughter will take food up to her room, and then choke on it while she’s in there, with no one to hear her gasp for help. I worry that I won’t find her until a day later because she hates me “in her section of the house”. Oh the scene – bugs crawling all over her poor stiffened body, a tuna sandwich halfway in her mouth, the cats eating her leftovers. I shiver at the thought. At least, I’d get to wear her clothes without anyone shouting, “Don’t touch my damn stuff.” That would be a bonus. She has nice clothes. I know because I buy them, and they cost a LOT of money.

I worry that one day I’ll just be driving along, and the earth will fall out from under me and I’ll end up at the bottom of a sinkhole. Those things are weird as hell. Shit like that should NOT be allowed to happen on this planet. I saw in the news once that a guy’s whole house fell into one. As if.

I worry that my worrying will cause shit to happen in a “create your own destiny”, negative consequence of “The Secret” sort of way.

Holy crap, I can’t type anymore. I’m worrying that I might be getting arthritis. My grandmother had that too. OK, enough. I’m off to read Megan Hart’s Tempted. That should put my mind right where it belongs. Ah, that’s better. 😉

52 Fun Things To Do This Year

Best And Worst Lists On The Internet