My husband and I fell in love in the 1980’s. It was a magical time. We didn’t see daylight for a good two years there. It’s amazing that we made it through undergrad. 😉

Right now, I’m missing him terribly. Well, not “terribly” terribly – like I’m not about to throw myself in front of a hay baling machine. And I am kind of enjoying the fact that I get to sprawl out in an x-formation across our bed at night.

He is away for a month doing some military training. He says that with my distaste for authority, I wouldn’t last a millisecond doing what he’s doing. He said that I would’ve spontaneously combusted on the very first day. He’s probably right. When I was eight, I couldn’t even make it though one Brownies’ meeting – too many rules. Anyway, all I can think about now – in his absence – is that one week is officially down, and we have three more long weeks to go.

This solo parenting really bites the big one. I was forced to eat celebratory pizza the other night at 1:30 a.m. after my son’s first show with his new band line-up. It was so deliciously hard to stuff down my throat.

But enough about me. This blog post is about my husband, and the circumstances surrounding his absence. Poor man. His hours right now are extremely long, and even though he brought this situation on himself by signing up for something when he’s already ridiculously busy, I feel marginally sorry for him [insert tiny violin playing here].

Last night, he asked me if I missed him.

Such a stupid question. “Of course, I do,” I said.

“I won’t. I might be looking for a dresser for our bedroom though.”

“Don’t.” He can be a real party-pooper. I just want our house to look stylish – not like the thrift store dumping ground that it usually resembles.

And that was the end of our conversation. It’s was lights out in the military barracks. I didn’t even have time to tell him that I’m thinking “mid-century modern credenza style furniture” as opposed to the typical “dresser” dresser.

All kidding/shopping aside, I miss my husband. And since we haven’t had much time to talk on the telephone, I’ve written him this love letter, which may or may not really just be the lyrics to a really bad 80’s song. I think it really captures the essence of how I’m feeling right now.

He should be able to read it tonight before he goes to bed, if he’s not off doing military stuff in the bushes somewhere (which I think he might be), and getting eaten by mosquitoes, but hopefully not by bears. 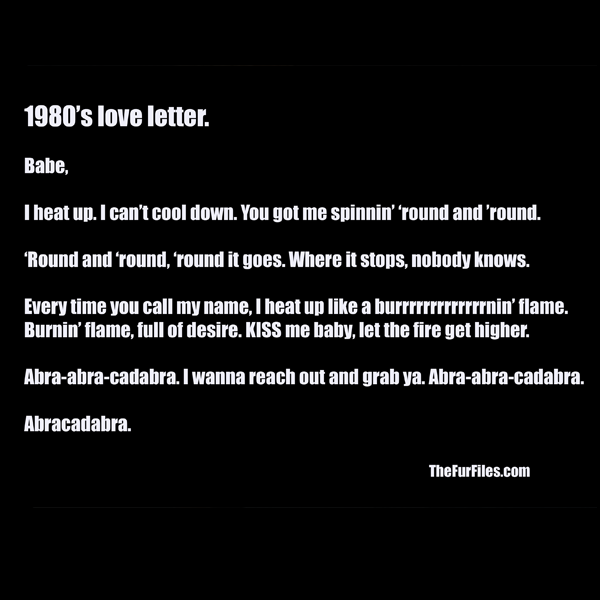 I Hate You, Steve Perry

Billboard Top Songs Of The 80’s