Sometimes, I want to wring my eighteen-year-old daughter’s neck. Sorry daughter, but you were there the other night. You probably wanted to wring mine as well. Yes, we were having one of those discussions that went from a simple disagreement, to a full out scream-fest.

I find that one of the most challenging parts of raising teens and young adults is that they don’t always do what you tell them to do, like that’s a surprise. 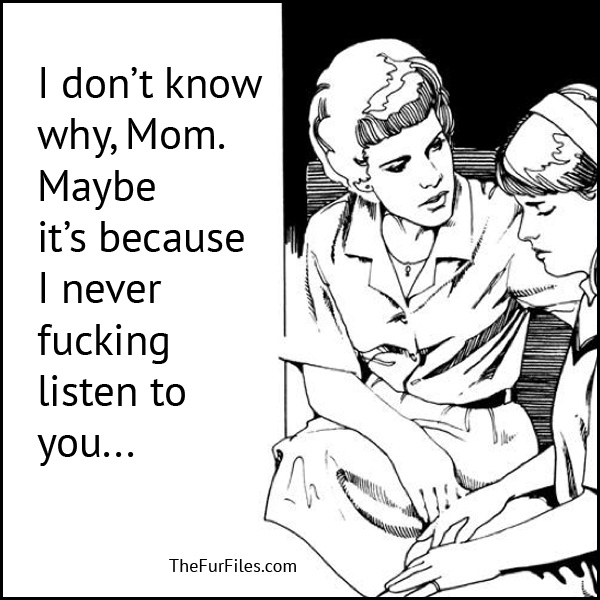 As parents, we have our children’s best interest at heart. I’m always saying this, especially to my daughter. “Do you think I”m trying to ruin your life? Why would I want to do that? I only want you to be happy and safe, and if I can pass along some of the lessons I’ve learned over the years, then I will.”

But we all know that people have to learn things on their own. You can only say, “Eating an entire bag of grapes will give you uncontrollable gas/if you drink a whole bottle of vodka by yourself, you might end up puking your guts out/you’re probably going to want to wear a coat out there in the minus thirty degree weather…” so many times.

Often, I’m not even trying to teach anyone a lesson. I just expect common courtesy, like that’s such an unreasonable thing for which to ask.

So when my daughter was going out with her friends the other night, I said – like any good mother would – “Call me and let me know what time you’ll be home.” That’s the reason she has a damn cell phone.

Her response – “I’ll try to remember.”

I was hoping for more like, “Sure mom. No problem.” But with my daughter, nothing is ever that simple.

“Make it a point to remember,” I said, snarling slightly. “And how are you actually getting home? Do you need a ride?”

“Whatever you do, stay together as a group. Don’t walk anywhere by yourself.” I remind her of this every single time she goes out. It is paramount in my mind, especially right now as they just found a woman’s body in the bushes very close to our house. As I write this, the police are still investigating the incident. It doesn’t matter. A woman is dead, and you can never be too cautious.

And that’s part of the reason for the scream-fest. A scared parent can be a very animated parent. But you know how young people are. They have no sense of mortality. I get it. I was the same way once. It’s not the easiest thing in the world to handle when you are a mother though.

This whole situation with my daughter brings to mind a few moments in the past when I’ve tried to give her advice, and she hasn’t listened. There have been a few times when things have gotten pretty screwed up too. I don’t ever want her – or any of my kids – to get hurt, but there comes a point when they have to make their own decisions. I can’t be there to hold their hands, and tell them what to do for the rest of their lives, can I? Or can I… [sly smile] An image of her locked in the basement came to my mind just for a split second. Nah, she’d whine and demand things too much.

It’s so hard as a parent to see your kid mess up. There have been a few occasions when I’ve just wanted to smack someone upside the head and say, “I told you so.” But then, what good would that have done? None, except to make me feel better, hence the reason I left out the smack but still said the words.

Anyway, the other night ended with me shouting, “Just call me. Don’t forget.” That’s what I said as I dropped her off at her friend’s house. Well, those might not have been my exact words. My EXACT words were more like, “You’d better fucking call me, or you can start looking for a new place to live. Start right now, in fact. Maybe Angela’s mom will let you live with them.” I was mad. And mad me doesn’t mince words. And I know that if my daughter moved in with Angela (not her friend’s real name, but close) that she’d be home faster than a cat getting caught in the rain. Once and for all, maybe she’d appreciate what a great family she has.

A mother can dream.

The No. 1 Mistake Parents Of Teens Make