We went to see World War Z last night. After hearing much hype about it, we were excited. Well, my husband was excited. I was just happy to get out of the house. It was my way of avoiding doing the laundry.

Our anniversary was this past Monday, and this was part of the date I’d planned. I was looking forward to spending some quality time with my better half – and my oldest son. Yeah, he came too – to the movie part anyway, not the dinner. Brad isn’t to be missed, apparently. We made him sit on the opposite side of the theatre. Kidding, we just didn’t talk to him. Kidding there too.

What did I think of the film? First let me say that I didn’t even know it was about zombies. Sure, I’d watched the trailer – sort of. Somehow, the “zombie” part never registered. As my husband says, I can be oblivious sometimes. Maybe I was just watching Brad [wink, wink].

One thing’s for sure, the movie was action from start to finish, which is good – I guess – if you are into that sort of thing. My husband is. So is my son. Me – I can take it or leave it. I preferred the English Patient, to be honest.

On another note, the acting was believable. Brad makes a good ex-United Nations something-or-other, semi bad-boy father. There were a few scenes however – like the entire movie – that made me say, “Hey, as if THAT would really happen.” But as my husband so annoyingly points out, I must suspend my disbelief when going to films such as this. It takes all the fun out of it if I don’t, and then the men around me get angry, and they sulk because I didn’t enjoy their “wittle movie wovie”, and the night gets ruined for everyone.

OK, I loved it. I REALLY did. It was the best movie I’ve ever seen, I swear.

I also learned a few very important things about life – things that could potentially save me (and my family, if I choose to include them) in the future. 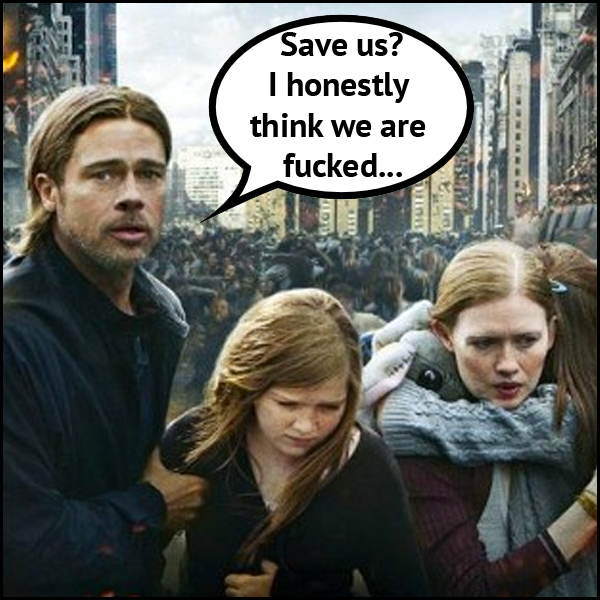 The first thing I learned – Brad Pitt is getting old. I know, that’s not going to save me from anything, but it’s nice to know that I’m not the only one. Even movie stars get wrinkles. Somehow, he makes it look sexy though. Not sure it works the same way for me.

Second thing I learned – it IS possible to get through an entire zombie apocalypse with your longish man-hair tucked neatly behind your ears. Seriously, what kind of hair spray do you use, Brad? I gotta get me some of that. I can’t even make it to the grocery store and back without turning into Edward Scissorhands.

Third thing I learned – it seems critical that everybody on the planet needs to go out right now and buy themselves a boat. When the zombies come, the only safe place will be in the middle of the ocean. I find it strange though. Zombies can climb anything, and they can jump super high and smash through glass doors with their faces, but it appears that they don’t know how to swim. Lucky us.

Fourth thing I learned – and I already knew this one, but it’s always good to repeat it – Canada is the safest place in the world to be, Nova Scotia in particular. Maritimers are simply the nicest, most hospitable people around. They truly are. I’m glad that Hollywood has finally recognized this fact.

Fifth and final thing that I learned, and this one is no joke. Brad makes a very profound statement: “Movement is life.” OK, so he’s talking about getting away from zombies, and I’m talking about fitness and exercising for good health. How about if I make it an “if-then” sort of deal? Like “if” zombies are suddenly climbing over the fence in my backyard one day, “then” I’ll be able to run really fast. Why do you think I work out so damn much?